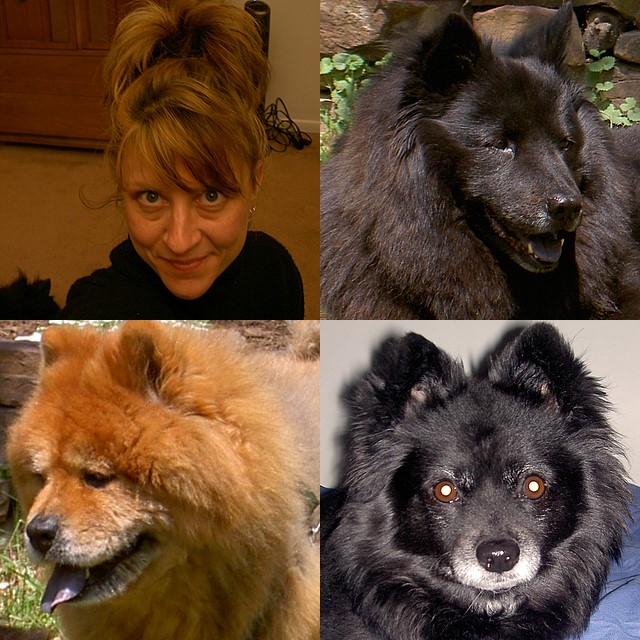 What are your dog(s) names and ages:
Maxie, Chia & Poochie

What is your dog's breed? (If you have more than one dog, please list a name followed by breed.)
Maxie (Border Collie/ Chow)
Chia (Chow Chow)
Poochie (Schipperke/ Spitz)

About Me:
I'm a lover of life and all creatures...BIG & small!

What is one thing your dog does that reminds you to open your heart and love more deeply?
Live with unbridaled joy and perserverence, which they are so willing to share.

Kathie said…
I am so sorry for your loss....our prayers are with you.

pamela said…
i hope you have a nice forth and your babys are so cute im learning to use the computer then you will see my sight better i think thats what its called l.o.l. i think.pamela.

Kathie said…
what an amazing story you have. Mine is not half of yours but I will tell you about Flash. (O, wait, how did you know we call him Flashman.) lol
I coach cheerleading. There is a young man at the gym who met a girl and they decided to move in together. I guess they were trying to play house and they each bought a puppy. Their relationship lasted one month. He moved back with his parents who said they didnt want Flash there.
My daughter has always wanted a dog. Always hounding me to no avail. We went to the gym one day and we were introduced to Flash. He was 14 weeks old. This young man had to bring him everywhere with him because he was afraid his parents would just let him outside and he was a baby and would be lost for sure. My daughter fell in love with Flash but I knew my husband would never go for it. So I took a chance and brought him home. My husband did have a fit but in about 2 weeks he fell in love with him and everything else was history..........
Flash was untrained and must have been hit with a newspaper. Everytime we pick uip papers, he flinches. Im not sure if he will ever get over this, but we try our hardest to not disturb papers or newspapers as to not disturb him.
He is a WONDERFUL little man. He is VERY loving. Would sit in my lap all day if I let him. He is 2 years now and he has changed all of our lives. We would be totally lost without him.
He does has play date sleepovers like once a month. Its so funny. My daughters boyfriend has a hound and they love each other. He sleeps for an entire day after being there over night......
Ok. enough of my story. Have a great 4th of July. And god bless you for taking in 3 dogs who absolutely needed you.......

Lauren Kalb Gropp said…
Well, my story is about my three girlie-girls, Maxie, Chia and Poochie, who were all rescued from abusive homes. In 1994, while disabled and unable to work, I was looking for a dog to love and care for. I went to PETSMART, in Manassas, Va. which had special adoption days at certain time of the month. Luckily for me, this was one such day. I arrived with no preconceived ideas of what I wanted, as I knew I'd know when I saw her......and I did. After peering into several cages, I came upon one with a frightened, black pup(Border Collie/ Chow), sitting squished in the back corner. The cage was opened, as others had tried to coax her out to no prevail. But, as I drew closer and began to softly speak to her, she slowly removed herself from the cage and landed gently in my lap. I could feel her fear, as I looked down into her eyes, as she looked back and snuggled close to my breast. I knew I had found my special gal. Her story was a sad one, as most of us would suspect. She was only 9 months old at the time and had already endured more then any living thing should ever have to. Her previous owners were a man and his wife. The wife loved and cared for the young pup, but the man was cruel and turturous, burning her with cigaretts and shooting at her, amongst other things. She was a frightened pup with a lot of trust issues, but she was mine and we'd work through it, no matter how long it would take. She would hide under the table, scamper at loud noises, nip my side while taking for a walk and try to run at any chance she could. This didn't bother me, as I could empathize with her and understood why she had these reactions. With patience, perserverence, lots of love and compassion she develope into a wonderful, warm, trusting, young lady. Maxie continued to thrive. Then, approxamately one year later I came upon an article in the paper about a two year old Chow Chow who was in need of a second chance and was running out of time. The Chow Rescue Mission of VA had placed the ad hoping for that special someone to adopt a badly abused pup. Well, you guessed it, I was that person. I went and saw her for the first time and knew I could give her what she needed and deserved. I had to return with my other pup, Maxie to make sure they got along with one another, and they did. She was owned by another couple who kept her chained out on the 4' x 4' balcony of their condo for most of the two years of her life, beat and nearly starved her. When I brought her home she had a poorly healed broken jaw, due to no treatment, infected skin lesions covering a large amount of her torso and was very thin. She was a bit skitish, but very gentle and sweet. She fit right in and aside from all the doctor visits to take care of her several aliments, she was a very happy pup and a wonderful sister to Maxie. Chia helped Maxie be a puppy again. It was a wonderful sight to see. They brought me so much love and companionship and I knew I had given them my best. We were a happy little threesome, that is until about three years later, when I was on my way back from church, where I'd stopped to show the children Chia and decided to stop at PETSMART, which was on my way home. As I pulled up, I noticed the cages in front of the store. Oh, I thought to myself, it must be adoption day. It was and we did and well, that's where Poochie enters the picture. Chia and I walked up to the entrance, but before I could grab the door handle Chia pulled me towards a cage in close proximaty. I was taken back a little, as Chia usually could care less about other animals, except for her sister ofcourse, as she's more drawn to people. But, for some reason she wanted to meet what was wiggling inside that big cage, a small, black, big eyed, pup with a tail that went around in circles with excitement. I asked if we could let her out and they obliged. Chia was thrilled with tail flurrying back and forth and kisses galore. I just watched as the little pup reciprocated and then came over to me and gave out a yelp. I knelt down and gave her some lovin', then asked if I could take her in for a walk around the store. Well, as you can probably summize, I found the missing family member I didn't know I had. As we left the store and she jumped into the front seat I knew she would be bringing us just as much fulfillment as we would give her, and she has. She was rescued from an abusive gentleman, if you'd call him that, who kicked her into the wall, causing her internal bleeding. She had recovered from the incident, but the rescue group thought she had some trust issues. When we got home she was greeted generously by Maxie and the three gals have been by my side ever since.

Maxie, my first baby gal just turned 16, is blind, but a very happy pup. Chia is 16, as well and has had to deal with several health issuess due to her abuse, is deaf, but chipper and content. Poochie, the youngster of the three has just recently turned 13 and never leaves my side if she can help it. I've made great strides as well and with the help of my three special girls I've learned never to give up and never to give in. Perserverence is sometime taught without a single word. Through the years we've brought many of smiles and comfort through pet therapy and just spreading the love. I'm now a pet service provider, spreading my special gifts to each and every creature I care for.

How lucky am I!

Wishing you and yours a long, happy, healthy life,