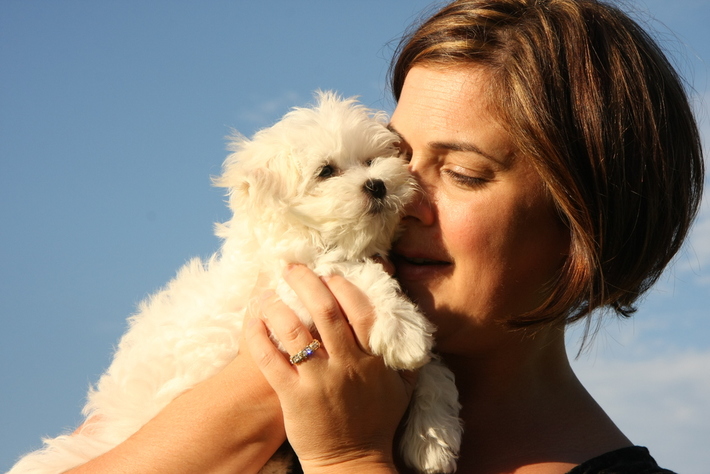 Some dogs prefer to meditate by themselves
1 Reply

Farmer and Boy Discover Love with a Puppy
1 Reply

this dog needs a nap!
19 Replies

What is your dog's breed? (If you have more than one dog, please list a name followed by breed.)
They're all Maltese ;-)

About Me:
I'm lucky to be married to James Jacobson, and was adopted Mom to Maui, his darling dog. Maui and I bonded much more closely than I would have ever expected, and I loved having my own "special" relationship with her. I miss her every day. Meanwhile, I am totally in love with our new puppy, Kanga. She is such a darling! Now she's got a new sister - Tinkerbell (although I call her Roo) - just a year old. So much fun to have two Maltese puppies.

What is one thing your dog does that reminds you to open your heart and love more deeply?
Maui cuddled with me at night (James thrashed a bit too much for an old blind dog to feel safe, I think). When she was really ready to fall deeply asleep, I knew it, because she sighed and flopped her little chin down on my shoulder, my neck, my arm, my leg - wherever she was, she just knew I was safe to be around. That trust in me cracked my heart open a little bit more every night. Now that Kanga is sharing our bed, she also stays close by and I just love feeling her little nose nestled against my cheek. Roo tends to stay near my feet, cuddling between them.

I made some hard phone calls this morning. I called James' co-author, Kristine Chandler Madera, to tell her about the liquidation sale for How To Meditate with Your Dog. I also called my mother.

The calls were hard because I had to ask for their help. I could call it grovelling ;-) but that's a little dramatic. It's how I felt, though.

You see, we still have too many cartons of books sitting in that… Continue

Hi Molly:  It's been a long time now,almost a year and a half since we were last in contact, I'm 76 and Hoku turned 3 last August 2, how time flies.

I was computerless for a while until a good friend gave me a lovely new lap-top last September  and am only now catching up with old friends such as you, Jim, Kanga and Tinkerbell (Roo).

Still haven't mastered the art of down-loading photos from my camera, printing, sending same but hopefully one of these days some one will take pity on me and show me how it's done, having been born before computers were more than a science fiction fantasy.  Electric type-writers were the "In Thing" then, along with automatic automobiles, only women-drivers also "new kids on the block" would drive ONE OF THOSE as no self-respecting man would be caught dead driving anything other than a stick shift.  Any-way once I've mastered the art of sending photos will forward same so that you can see those four-pawed beings that keep me young? or more or less sane!

Hoku still loves her squeaky toys, thank-you for naming her for me, is as mischievious as ever, hopefully that will never change, and as for the rest of my 'Motely Crew' they're always morwe than ready to join in her fun and games.

Love to all, Lorna.

Mrs. Lorna R. Lanyon said…
Hi Molly: I certainly do remember Hokulani means Heavenly Star and it fits in perfectly with her Great Grandmothers nick-name Grey Ghost, commonly known as 'Minty', and her mother's nick-name 'Silver Shadow' commonly known as Iona, while wee Hokulani Gets Hoku. I've bred Yorkies for thirty years, and thought her immediate family, Minty, Islay, Grand-mother, Dad, Little Man, and Mum were smartest of the bunch, BUT HOKU?!!!!she's more mischievous, full of beans, and can run circles round the others when it comes to escaping any form of confinement, unless locked in! She's taught them how to open louvered doors between OUR BED-ROOM (Yorkies PERMIT me to share it AND THE BED), and bathroom, then the other louvered door leading down a short hall to main part of house, and from there to the front porch, IF Door leading onto porch is left ajar, even as little as an inch or two, Finally by using combined weight of Five Yorkies (Twenty-Five pounds in total) push open screen door leading to side yard and VOILA FREEDOM!!!!! and folk wonder why my hair is WHITE!!!! Can't blame itentirely on reaching 75 years of age, last April 12! Would I change a single thing about my almost TERRIBLE TWO YEAR OLD? NEVER!!!! She and her family co-horts are whatmkepp me young, and make life worth living. Love to you and James, tummy rubs, cuddles and all their favourite things to Kanga and Tinks . By the way do either of them like 'Squeaky Toys?' Hoku loves them and is rarely seen when running around the house with-out one in her mouth happily squeaking it as she goes! Lorna

bill cronin said…
MOLLY,ANGEL PASSED AWAY TODAY AT 5PM,SHE DIED IN MY ARMS,IT WAS TIME FOR HER TO CROSS OVER,HER BREATHIN WAS VERY BAD THE CANCER
SPREAD SO FAST IN ONE DAY,I STILL CANT BELIEVE SHE IS GONE FROM ME.
PRAY THAT HER JOURNEY IS A SAFE ONE AND PLEASE SAY A PRAYER FOR BOTH OF US,I CANT EVEN THINK STRAIGHT.GOD BLESS YOU. BILL CRONIN

its been way tooo long since i've been here at this site....I hope life is goin well for you. At this time of year, I hope you celebrate with friends and family and especially with your pets. Thanks for stilll being my friend after all this time.... Murphy & john

Lizabeth aka Beth Kahn said…
Sorry Molly,
I know what its like to lose a good friend, my dog of 13 yrs.
My own brother died, and I cried more for my dog than I did for my brother.
Sounds harsh but its true..
Grieve for as long as you need to, then go out & get another dog, because you have love to give to a new puppy.

Carolyn Holt said…
Molly,
So sorry about your loss. We have lost 7 dogs in the last 8 years & each one hurts as bad as the one before but there are always so many rescues looking for a great home. God Bless, Carolyn

Grief Worthy said…
So sorry to hear about Cyrus. You have my prayers for sure. Maybe he will be lucky enough to meet my angel NIKKI GIRL, up there. Please let your friend know about www.griefworthy.ning.com and www.griefworthy.com. She will find comfort and healing there.

Rebecca Drew said…
hi Molly,
i am so sorry for your loss. i just lost my baby on july 20th, his name is Coal. he is the love of my life and i just don't know how to live without him.

Helen said…
Hi Molly,
I use a product called "Eye Clear" which seems to help with Ceili's below the eye stains. It's an eye drop, but I've never used it that way, have just applied it externally. It's the only product I've found for eye stains that doesn't carry the warning "not to get in the dog's eyes". To be able to do that would be one neat trick!!
Also, I just loved the video of you and Kanga. Thank you for sharing it with all of us, your huge "extended family".

Just a note to let you know I received your message. Certainly, I am not trying to interject myself into the procedure. I have limited time. My response was just because you suggested that I might be able to assist.

Good luck with the photo contest and if you want anything from me just let me know.

I looked at the painting of Maui today. It is very nice and I am sure that James appreciates receiving it.