I love it! Let's all participate and send each other our doggie(s)' Valentines! Loving All Dogs

Hi all my friends

So much to tell you. My mom and I have been so busy. My mom saves animals and I help her. Mom said I'm the best helper ever. My mom and I hope everyone had a good Holiday and Happy New Year. My mom broke her ankles she fell. Her foot went to sleep and she got up and went to walk and fell. I was there to help her. I had to go and stay at my Aunt Robyns house. I stay over night there when we baby sit and I love going over there. I have so much fun there. My mom called me on the phone to. Now we… Continue

The story of the Fur Angel In a place far beyond the horizon Angels are trading their wings and halos for fur coats and bones to be born on earth as dogs. But first they must learn what it means to be a dog, so they go to school. They learn about various dog breeds and different dog jobs and when they graduate they get their fur coat and are born on earth to find you...the person they were made for. And when their time comes, they trade back their fur coat for their wings and halo and… Continue

Last Christmas my Mom passed away and that left her 8 yr. old 117 lb. German Shepard , Mimi to be cared for. I have a tenant in Moms house that goes to work early in the a.m. and returns late in the evening. So Doggie Day Care seems to be the answer. Ceasar , however being the Alpha he is, has taken over her care completely. He decides when she eats,when she goes out and where and when she sleeps. If you can imagine a 20 lb. Jack Russel escorting a huge GS around a fenced in 1/2 acre yard, you… Continue

Nice to hear you sing about such a love of yours.

Ciao a tutti.
this post will be a bet to myself because I have really not much to say. So where am I beginning from? From here, from my sitting at the computer while Mimma is sleeping in the other room. Lucky creature. Before sitting I had to shut two bedroom door otherwise she would surely go on a bed to make her winter dreams. "She has a dream", not so serious and universal like Martin Luther King but I would like to know it. I am a new entry. I don't speak english so well but I can… Continue

Would love it but would like it to be inclusive of any type of pet, not just our doggies, plz. 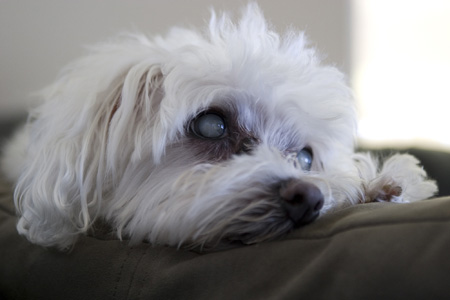 I've never written a in a blog, but I guess it's a good way to get things you're feeling out of your system. I will probably just ramble. I just read the most beautiful tribute to a four legged friend and it almost brought tears to my eyes. I don't know if it sounds weird or not but I love and have loved all of you babies as if they were my kids. It's interesting to me that "dog" spelled backwards is "God". It's always made me think about what a wonderful gift they are to mankind. I'm sitting… Continue

Bath:
This is a process by which the humans drench the floor, walls and themselves. You can help by shaking vigorously and frequently.

Bicycles:
Two-wheeled exercise machines, invented for dogs to control body fat. To get maximum aerobic benefit, you must hide behind a bush and dash out, bark loudly and run alongside for a few yards; the person then swerves, and falls into the bushes, and you prance away.

Bump:
The best way to… Continue

10 signs your dog is smarter than you

Most of us tend to think our dogs are pretty smart and on occasion they have even been known to outwit us, at least temporarily. So how can you tell if your dog is really smart... maybe even smarter than you? Here's a few indications...

1. Neighbors complain about loud music and howling coming from your apartment in the middle of the day when you're at work
2. You find mysterious sculpture of a human (who looks strikingly like you) on a leash in your living room
3. Ice… Continue

A man's dog stands by him in prosperity and in poverty, in health and in sickness. He will sleep on the cold ground where the wintery winds blow, and the snow drives fiercely, if only he may be near his master's side. He will kiss the hand that has no food to offer, he will lick the sores and wounds that come… Continue

The day you laid me down to sleep
you prayed to the Lord; my soul to keep
I know you had to send me on my way
but you sent me to a new; better; and much brighter day

You sent me home; to heaven above
where I'm cradled in God's arms; covered with His love
I understand what you did; you did out of love
and I'll return that love; from my new home above

My sickness is gone; and I'm free here to roam
I run and play in the meadows; here in my… Continue

Dog quote of the day!

He is your friend, your partner, your defender, your dog. You are his life, his love, his leader. He will be yours, faithful and true, to the last beat of his heart. You owe it to him to be worthy of such devotion.
- Unknown

Priscilla Maynard-Correia I am very sad tonight. I had to put my eldest dog, father to my remaining dogs, to sleep today. Timber was a gorgeous dog and extremely loveable. With all that is going on, this was something I did not need to have to do right now! I love you and miss you Timber! His picture is in My pictures.

On Jan. 5, my husband and I had to make that dreaded decision to put our Buddy down. He was 12 years old and had cancer for the second time in 2 years. It was a very fast growing tumor and was affecting him going potty. His back legs were giving out and he was falling constantly. That has to be the hardest thing to do to take a life of something you love so deeply. Al and I have no children so as a lot of you know from your own pets, that was our baby.We took him to the vet and there were other… Continue

Wishing all of you, Humans and Fluffs a healthy 2010 and beyond. Oliver the Bichon, Lexus and Beemer the Coton de Tulears and Coupe and Deville the Main Coon cats all survived the move to TN from NY. We are loving our new surroundings.

My OLIVER book is still selling and all profits go to rescue. The local paper did a story about OLIVER, last week. www.worldofoliver.com is the website for OLIVER.

Once again, Happy New Year to all.…