REMEMBER ME WITH LOVE NOT TEARS AND THINK OF ALL THE HAPPY YEARS.WHEN I WAS SICK,YOU WERE BY MY SIDE,YOUR TEARS AND FEARS YOU TRIED TO HIDE.I KNOW YOU DID THE BEST FOR ME, GOD ABOVE WAS CALLING ME.THE TEARS WITH TIME WILL GO AWAY,BUT THE LOVE WE SHARED WILL ALWAYS STAY.NOW THE LORD HAS SET ME FREE,THIS IS HOW I WANT YOU TO REMEMBER ME.ONE DAY IN THE FUTURE,JUST OVER THE RIDGE,I:LL BE WAITING FOR YOU,STANDING ON THE RAINBOW BRIDGE.THE GENTLE BREEZE THAT MAKE THE CHIMES SING THAT WAS ME,I WAS…

Benson and the Froot Loops

Benson has been a pretty good puppy---easy to train, very easy going and will do almost anything you want-as long as he can figure out what it is you want! We've not had problems with him getting in the trash or stealing food off counters or tables. He is tall enough now to take things off tables without much effort.

The other morning, I left a half of a box of Froot Loops on the kitchen table and set off to get ready for work. When I came out to the kitchen, I noticed the box was… 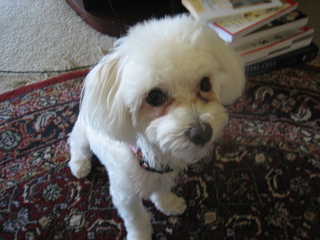 re photo of you all

What a lovely photo of you and your two dogs, tinkerbell is settling in fine with Kanga, . My dog Mandy ,is also a barker, and I mean a barker,,,,,,everybody who goes past our gate and of course the Postman,he gets the worst of it..why is is dogs have a thing about Postmen? I watched something on TV a few nights ago and it came from near "Maui" and I thought of you.. Have a good weekend,,,,, James, your Tinkerbell is adorable...I also have a Tinkerbell (a rat terrier) five years ago the breeder was going to put her down because she was born with out a tail, well when i met her when she was five weeks old I fell in love with her and so did my Basenji so we bought her and took her home.. sadly our Basenji passed away last year but we remember him with so much LOVE.. Tinkerbell is a very loving quiet dog welcomed by all in their homes... actually she has more friends than I do...… 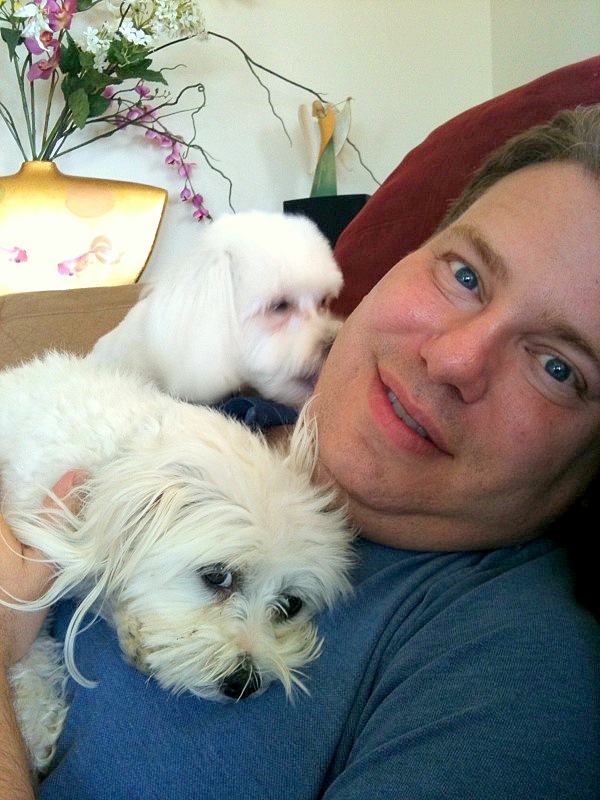 Since my last post, we have been to the doctor to have Alex's stitches removed, since he decided he didn't want children, and to have Sam eyes checked because he had an infection. The pollen is really tough on all of us. While we were at the doctor's office Sam found out that he has tiny cataracts in both eyes. My heart is broken. Does anyone have any suggestions of what steps we need to take from here?

She is so lucky to have you , Molly and Kenga to be in a loving, caring home. Congratulations to two wonderful dog lovers!

Aloha, what a beautiful pair of dogs you have now, Tanga seems quite happy to have Tink sit on your lap, I think you will all get on well together, thankyou for sharing,,,,Hazel

What a lucky little Tinkerbell; Congrats to all four of you...

We lost our 14 year old Shih-tzu last May and our 11 year old Golden Retriever this last January, but we got CeeCee on Halloween and she is 8 months old today. (and a little Shih-tzu). James we are SO happy for you with your newest addition.......dogs "are" our lives, and you've saved hers to a wonderful little friend and a happy family.

It has been 9 days since I had to help my boy Bailey cross the bridge. Benson, the puppy, and the cats are still looking for him. I know in my heart he is happy and waiting for me, and someday we will walk in the fields again. This time he will have no pain, have all 4 legs and be able to run and walk without stumbling.