My blog, Packs and Paws

Hi everyone, I have started a dog blog named Packs and Paws. It is still pretty early but I am trying to get some initial feedback both on the ideas on it as well as your interest on how I am treating the ideas over there.

I just finished a good piece on dogs as carnivores that explains the dog's digestive system and how they should eat certain food and others that humans usually like to give them should be avoided. You can find that post in the link below, let me know what you think… Continue

Who else wants their dog to be well behaved?

around people and other dogs?
AND have them obey all of your house rules...
... even when you're not around!

If your answer is "Me!" then read on because you're about to discover how to put an end to your dog's behavior problems once and for all using proven techniques that give you immediate results...
b4f95uct8ks2oagkjtsct5ye0.hop.clickbank.net/"…


This info. above is an inspirational site and network to heal others through sharing your stories of grief. Your pet or loss of a loved one is a devastating time in ones life. This site deals with healing through it's community sharing there personal stories. It allows you to keep the meaning and purpose of your loved one alive. Check it out and please pass this info. on to others who might be in… Continue

The boxer puppy I had has gone back to his breeder. The fact that he was a year old was only a problem because his breeder did not even housebreak him. I had all the trouble of a new little puppy with a nearly grown dog. Then there was the leaping and nipping. Nipping hard enough to draw blood. Something Donovan never did.

Donovan did jump up on people, and nip, but he never drew blood. He also quit doing it when I trained him not to. Dazzler never learned.

Last Saturday, the first Saturday in May, Dazzler went back to his breeder.

Unbeknownst to me, he had nipped three of my friends hard enough to draw blood. A service dog cannot do that. So that alone would have made him have to go back. However, he also attacked Donovan. That was the last straw. I love Donovan. He's saved me from harm many times.

Dazzler, while loving in his own way, was just too feisty. Too willing to do battle on slight provocation. So I said good-bye to… Continue

He was just a small red puppy that pulled my heart strings tight;
A sole survivor of a litter, on a stormy April night.
With a promise of a future when we brought him home, you see,
Just a tiny, constant shadow who would always follow me.

With a serious look upon his face, he named himself that night;
Became "Karen's… Continue

When is too soon to get a new dog?

When your heart is ready, in my opinion, is soon enough. No dog will ever replace the one you lost. You just have to decide when you have room in your heart to love another. I lost my service dog. He did for me what no other dog has ever been able to do. Unfortunately, for me, there has not been one to replace him. For you, I would advise to go with what feels right and do it with love and peace in your heart.

Hello James and Aly I lean towards James personal observations of the grieving process give yourself and family time to recover from the mourning. James advise applies to human loss too thanks you James for nurturing Aly and me,love n blessings,Alexander. 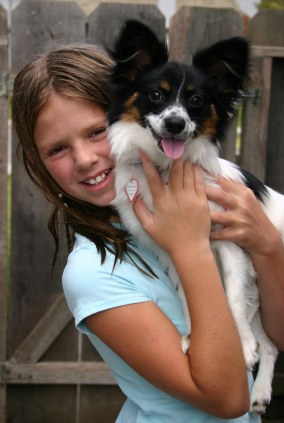 Check out our new campagn

We've launched our new ad campaign, "It's not your dogs fault there's a recession!" Check it out, According to experts its imperative to teach pets, especially puppies about proper hygiene as soon and as early as possible. If however your catch your canine peeing or pooping in an inappropriate spot, simply “escort” him or her to the proper area reinforcing it as an acceptable bathroom spot.

Success say experts depends on repetition of action. Taking that into account, they suggest planning meals at regular times and intervals, about three times a day.