I have to thank
K9Krazy and other dog trainers/workers on this site who really helped me make a crucial decision last winter - I would be pulling my hair out this morning without your help. Kanga turned into a teenager two days ago (on her ten month birthday, August 11). She's feisty, independent, and testing boundaries. She's lost almost all of her training, which means that she won't do as I ask right away. She acts like a tough teenager ... "You're not the boss of me!" For example, our sweet little shy puppy used to sit politely by a wide open door and look up at me, waiting for permission to leave. She would never leave first ... she always followed me through the door. 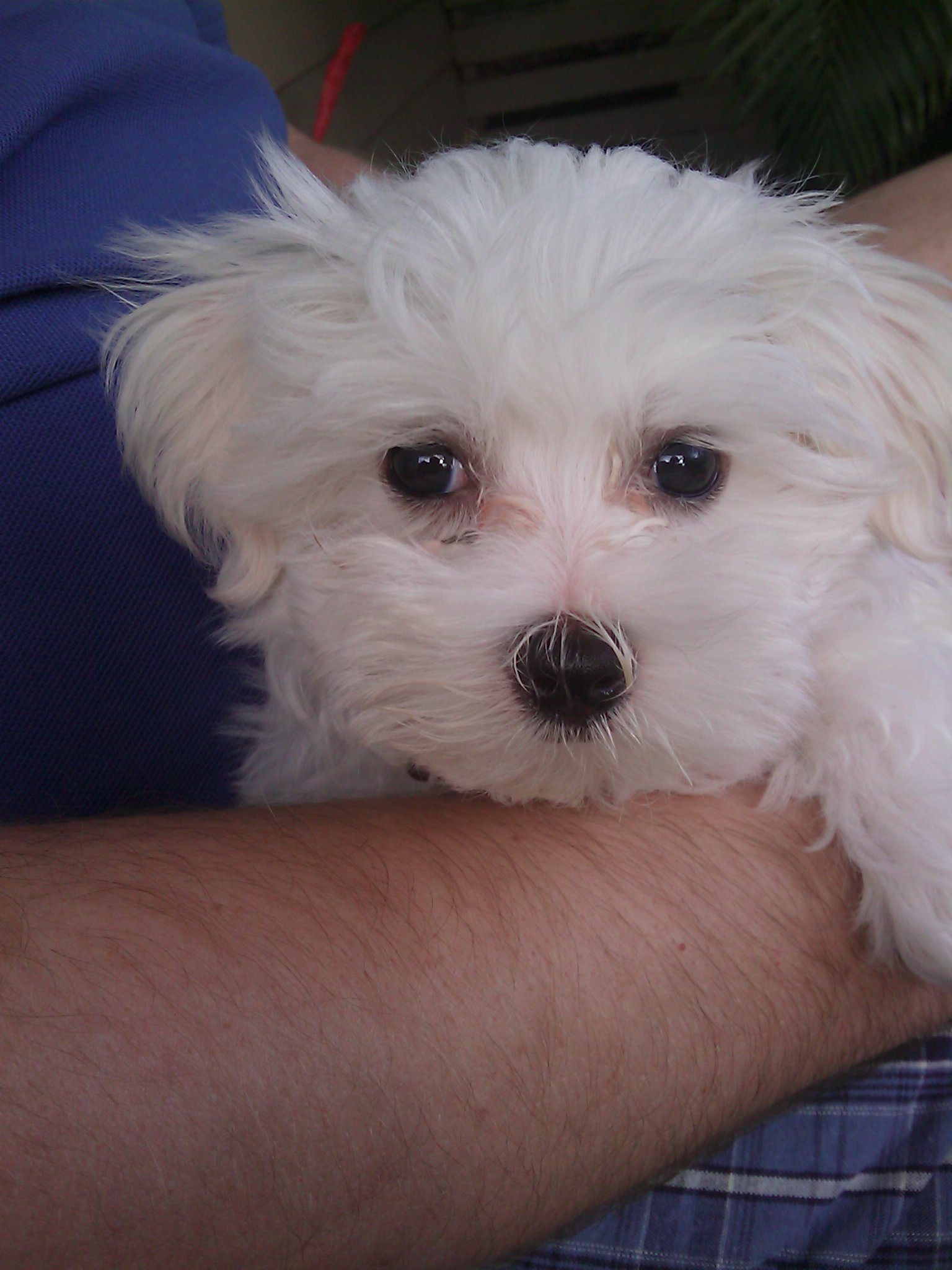 Well, this morning I opened the sliding glass door a crack to let a fly out, and before I knew it she had flown out the door and was out in the front yard. She was like greased lightning! A dog friend was passing by, and thankfully she was focused on meeting him and didn't take off down the street.

Once we cajoled her back into the house and got her on a leash, I looked at Molly and said "I'm writing a thank you post to dog trainers right now." When I found Kanga last November, I was convinced that we should get her and her sister, who we were going to call Roo (after the characters in Winnie the Pooh). When I announced the happy news to this community, several dog trainers posted publicly and also wrote me privately with their concerns. They talked about how in a "wild" pack the puppies would be separated from their littermates and taken into the pack as a whole. They would learn to be part of the pack, separate from their family. This helped them to become fully responsible adult dogs. In a human family, two puppies, especially littermates who are already a "family," could skip this developmental process. Instead of integrating into the new "pack", the puppies might "stick together" and not bond completely or properly with me and Molly. The trainers all said that training could be not just twice as much work, but ten times the work. (That made me sit up and cock my head to the side.) They emphasized with great compassion that while this situation could work out fine, it was a lot of hard work. They suggested we get one puppy now and bring in another puppy when she was older. We were pretty excited about two puppies, but when four dog trainers all contact me, I pay attention. We called a dog trainer friend and asked our vet, Dr. Dressler, what they thought. We did some research and read some articles online. And then we decided to take the advice. I'm so glad. As you know, having a new puppy is a lot of work. But this teenage thing is even more! I can see that if Kanga had a sister she "listened" to more than she listened to me, she would be even more likely to be badly behaved. This morning she probably would have trotted off down the street with her sister and ignored our calls altogether. I was thinking about getting a new puppy this winter when Kanga turns one. Now I'm thinking to wait until she's eighteen months and a little bit more adult. We don't want a puppy to learn from her, at least not this week. :-) We'll have a little bit more patience and make sure we're a stable pack before we add another little one. I'm not saying this is the only way to do things, but I for one am glad that K9Krazy and others - I wish I could remember all of you specifically - advised me so well. For me, this is the right thing to do. And in the meantime we will be taking her for an extra walk everyday to drain that extra teenage energy. PS: Thank you for all the suggestions and calls about the book - I am still negotiating with the distributor and will let you know ASAP!

Comment by Rebecca Wacker on August 16, 2009 at 1:21pm
Have patience with Kanga. Go back to your basic obedience training. She is in fact a teenager. Remember sexual maturity comes very quickly 6 to 9 months. Behavior maturity is MUCH longer like around the 2 year mark. Take care and love her lots and still have fun with her.

Comment by Beth on August 16, 2009 at 8:38am
I also recommend classes - for Kanga and you! My other recommendation is a harness that would properly support her and not result in any discomfort around her neck.
And, let me tell you that an older dog is one of the greatest trainers you can find for a younger one. When my Maggie "adopted" her brother, Mr. Jiggs, she taught him all the stuff he needed to know, including to sit facing a corner when he did something she disapproved of. This was funny to us, of course, but after we lost her and Mr. Jiggs "adopted" a little brother, he taught his brother lots of things, including the corner thing. He also helped him to learn to use the dog door, to become house trained, and basic manners. I think it would be really cute to have two littermates, but the younger-older dog arrangement seems to work best, at least for the members of our pack.
No matter what, though, I love my boys so much and they both educate me daily.

Comment by Peggy F. Levin on August 15, 2009 at 6:01pm
Molly,
I knew she wasn't tethered---I could see that, I was just concerned about the width of the lead and length being too long, wide and heavy, but you explained that. Thanks for taking my concern so beautifully.
Peggy

First off, I am so glad Kanga came back and is safe...What a scare you must have had. Second,
You don't know how true your words are about the pack mentality. I wish I had heard the wisdom of your trainers before we started our pack. We have a bunch of hooligans that live in our house. We had one Yorkie for 2 years, then introduced our Maltese. After that we brought two puppies in about a year later and then two more another year after that. The pairs of puppies are related and they bonded with each other. They egg each other on, and are real mischief makers. We thought it would be good for them to have a littermate to play with, but didn't realize how difficult it would make the training. They are getting better as they get older, but it is still an effort every day. Their ages range from 3 thru 7, so we will be working with them for a lot of years since they are small breed dogs.

Comment by Peggy F. Levin on August 15, 2009 at 10:08am
My concern as well. Looks like way too big a lead also for such a little dog. Something I would use on my Irish Wolfhound, weighing in at 145# and NOT my Maltese, weighing 5#. Yes I have both ---and the Maltese is the boss, right after me. :) My IW treats her with such gentleness--tis amazing and I'm so grateful as well. BUT this is the way it HAS to be or I couldn't have this mixture as it would not be safe for my little one.
Just my humble opinion about the lead Jim, we don't want anything to happen to Kanga and sometimes we see things others don't when we sit outside the box.
With respect,
Peggy

Comment by Ana Chavez on August 15, 2009 at 9:15am
I have 2 shitz-poos that are litter mates. I raised Bijoux from a puppy, but rescued Sanchi from the home that raise him till he was 21/2.He had developed some bad habits in his first home, that I have been able to break successfully with Bach Flowery Remedies. They are natural, organic and very effective and need only very small doses in water. The dog trainer suggested them for me, and made a mixture of Buttercup and Chestnut bud.
These were for Sanchi's low self esteem and to reverse his bad habit of pooping in the house.Worked like a charm.Of course I had to remain the alpha and pack leader, but he has really turned the corner and is more loving and confident than ever. The dog healers website is www.starflowerconsultations.com
Good luck to you!
Ana </ My Cavalier also became one year old in July. I was wondering why her training seemed to be going out the window, and now I know why, lol. She has eveidently become a teenager and is occasionally oblivious to commands she used to know forward and backward. From the comments on your blog, now I know what to do. If you can work through this phase, I can too! God Bless, Bobette

That picture was taken with a wide angle lens to look funny, the leash was held way up high .... she is not tethered outside ... thanks for your concern and advice!

Comment by Vickie on August 14, 2009 at 6:26pm
Lots of love and soon she is going to be an adult and then you are going to remember all this as good times.

Comment by Vickie on August 14, 2009 at 6:26pm
Lots of love and soon she is going to be an adult and then you are going to remember all this as good times.